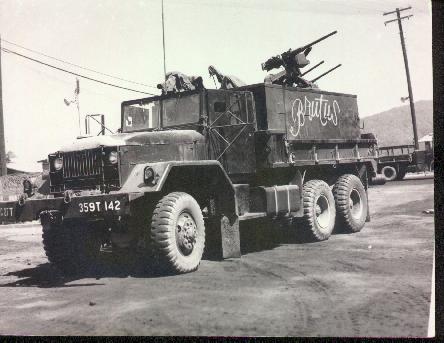 The Birth of Brutus

I am CW3Ret Louis Brittingham, formerly the Maintenance Warrant of the 359th in 1968/69. During my tenure as maintenance tech/officer of the 359th, it was my custom to occasionally ride the convoy to experience what the men and equipment had to endure and to enhance the maintenance precepts for convoy operations. Most of the time, I drove my own 3/4 ton while my 5-ton maintenance truck carried mechanics, mounted spare tires, oil, fuel, etc.

Few trips were made thru Ahn Khe Pass without an ambush. We lost men and vehicles. King Cobra, Little Nancy, King's Men and some more gun trucks already existed, however; there was never too much defensive firepower. I decided that my 5-ton could double as a gun truck and maintenance truck so I set about designing it and "obtaining" the armor and weaponry. I conceived of it having a large caliber main gun and at least two 50's. I had an Air Force friend who got me a 20 mm aircraft wing gun which I tried to build a swivel mount for as the main gun. Unfortunately, my welding team could not build a mount that would hold up under sustained fire of the 20 mm gun. I don't know how in the world an aircraft wing stands the shock.

It just so happened that my brother, Sgt. Alvin Brittingham, a Huey Crew Chief, was station up at Phu Bai with the 101st at MACV Forward. I had now opted to try and mount a 7.62 mm Mini on the gun truck so I went up to visit Al and came back with the gun and all it's accessories. There was a Sgt. Prescott in the unit whose truck was shot up on every convoy and he had a score to settle with "Charlie." When Sgt. Prescott saw what I was doing with my maintenance truck, he asked if he could transfer to maintenance and drive this new gun truck. This could not happen but what we did do was to assign my truck to his section and have him command it. So then Sgt. Prescott took an active role in the building of the truck with my maintenance section. he spent many hours when not on the road; in the shop cutting, welding and sweating over his new vehicle to be.

We installed armor plate on the floor side-to-side. Then we installed armor plate against the inside of the bed walls; front and sides. Then we installed armor plate the width of mounted spare wheels inside of the outside armored wall. This wall had a rear plating as well. We armor plated the windshield and doors each having armored glass in them. We then placed the radio in a cutout between the cab and body. The 20 mm mini-gun and it's feed mechanism was installed about the center of the inside armored area on a tripod mount having a full 360 degree field of fire. In each front corner, we mounted a 50 cal machine gun on 1 & 1/2 foot length swiveling brackets that could be moved from the side rails to the front rail; thus giving each gun about a 185 degree field of fire. There were claymores on the out side of the bed which were only armed when underway. We then sat a 40 mm mortar behind the main gun tripod with sand bags on the legs and base to stabilize it when fired. Needless to say, each gunner had to be aware of what he was doing all the time.

Sgt. Prescott asked if he could name the truck. After all of his work and his being now the commander of the newest 8th Group Gun Truck, it was only fitting that he should. Sgt. Prescott went to a Signal outfit or somewhere and came up with that bright "Signal Orange" and Painted in huge scrolling letters--"BRUTUS." I hope that if Brutus is still around that Sgt. Prescott's original design is still on it. I still have still shots and 8 mm motion pictures of Sgt. Prescott's crew and their first test firing of Brutus. We towed a 1/4-ton trailer out to the range and pretty soon emptied it. It was an exhilarating event with all of that fire power off of one gun truck.

I wasn't out with the convoy when Brutus was initiated, but the story goes something like this. They were going down Ahn Khe Pass when "Charlie" ambushed the convoy. Of course the rule is if you can, keep moving. It was said that Sgt. Prescott & Brutus was somewhere between the middle and the rear of the convoy. When they arrived at the ambush site, Sgt. Prescott opened up with the 20 mm and the front gunners with the 50's. It was said "That it was like mowing grass." "The elephant grass and Charlie were being mowed down leaving only a wide clearing around Brutus." Gun Ships had been called but when they arrived on site and saw what Brutus was doing, they said that "They would come in but that Brutus had to stop when they got in close." After all, that was the same gun they had onboard and they wanted none of that.

This was one day that Sgt. Prescott's truck was not shot out from under him. When I next saw Sgt. Prescott and crew, they were still on an adrenaline high from the excitement of that initiation of Brutus. I have to confess; I too was mighty happy to have had a small part in this success story.

Not long after, I lost half of my maintenance crew when Charlie sent six 122's right into our motor pool area; blowing up the shop and wounding all of my night shift. Time went on. I completed that second tour in Nam in March of 1970, came home and tried to forget. Still, I see faces, hear familiar names, and see visions of the past. Tonight I typed in 359th and up came Brutus. Yes, I know Brutus and when I think of Brutus, I see Sgt. Prescott and the faces of many other good men. I went to "The Wall." Some were there. I see you commanded and/or crewed Brutus. I am sure that Brutus served you well. Brutus was born of the Spirit, Will and Determination of some mighty good men.